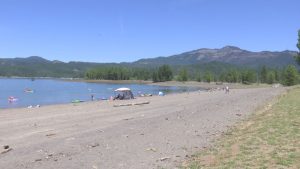 PROSPECT, Ore. — The body of a man who presumably drowned at Lost Creek Lake more than two months ago still hasn’t been found.

Now, the Jackson County Sheriff’s Office says they are bringing in outside help to continue the search.

Irving was pronounced dead after being rescued from the water.

The brothers were boating with family members when one fell off a tube and began to struggle.
The other brother went in to help, but they both ended up in trouble.

Neither man was wearing a life jacket.

Since then, the sheriff’s office says it’s been searching 5 to 6 days a week. However, they are only able to search on the surface of the water.

“After the incident, we contacted a company out of Idaho. It’s actually a retired couple who are experts in side-scan sonar. And this is how they spend their summers, going out and recovering loved ones,”  said Sgt. Shawn Richards, Jackson Co. Search & Rescue.

Sgt. Richards says the couple will be bringing in a boat that makes a side-scan image of the bottom of the lake until they locate the body.

The sheriff’s office hopes they can get to Oregon within the next couple of weeks.