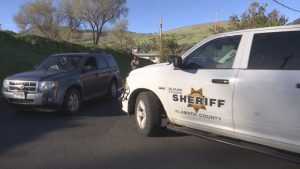 Klamath Falls, Ore. – The Klamath Falls man whose dogs died after they were left in the car is now facing misdemeanor charges.

John Harrison was arraigned on May 18 on two counts of animal neglect.

The dogs died the afternoon of May 3 inside a car parked behind the Klamath Tribute Center. The temperature was around 80 degrees that day.

“Our officers responded to the scene along with members of the Sheriff’s Department,” said Jim Nielsen of Klamath County Animal Control. “And when they arrived they found two deceased dogs in a vehicle.”

Officers said it appears the dogs had tried to escape from the car.

“One dog was a Border Collie mix, the other dog was a Rottweiler mix,”added Nielsen.”With the Border Collie actually being adopted in 2016 from the Klamath Humane Society.”

Officer Nielsen added, “It is never a good idea to take your dogs and leave them in a car, especially when it’s warm temperatures, because this is the worst case scenario that could happen.”