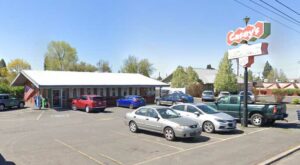 The state reportedly received numerous complaints about Casey’s Restaurant in Klamath Falls offering indoor dining at a time when the county was in the “Extreme Risk” category.

The complaints triggered an inspection by public health officials.

Oregon’s Occupational Safety and Health Administration determined the restaurant willfully began offering indoor dining on December 17, 2020, and continued to do so through February 11, 2021.

“Since the pandemic began, we have focused our efforts on engaging and educating employers about expectations. In the vast majority of cases, we have not had to conduct formal enforcement visits, because most employers are choosing to do the right thing,” said Michael Wood, administrator for Oregon OSHA. “They are doing so because they know they are making meaningful contributions as part of a larger and multi-faceted community effort to end this pandemic sooner rather than later.

“Yet, a critical part of Oregon OSHA’s longstanding mission is to enforce workplace health and safety standards,” Wood added. “And we will continue to fulfill that mission when employers refuse to address credible complaints or continue to insist on ignoring reasonable safeguards for their employees.”

Employers have 30 days to appeal.