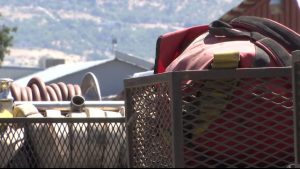 MEDFORD, Ore.- Despite drought conditions and record high temperatures practically turning southwest Oregon into a tinder box, the area went without a major fire this summer. Monday, representatives from across the Rogue Valley laid out how they kept the 2021 fire season safe and successful.

At a press conference, representatives from fire management groups across the area, including ODF, BLM, and the U.S. Forest Service, recapped what fire season looked like this year.

“2021 was an extremely long year. But it was an extremely successful year,” said John Holmes, representing the Rogue Valley Fire Chief Association. He, and other representatives, highlighted how community collaboration helped in fighting fires.

“With the cooperatives, we have with the Rogue Valley and the fire defense board, we were able to utilize all the resources we have here in Jackson and Josephine county,” he explained. Department representatives also broke down fires that did happen, detailing how they were kept to low acreage. May credited the success to a focused, aggressive initial attack.

”We enhanced the use of lightning strike data for data and patrol. And we had some folks work extended shifts in the excess of 24 hours on some of our larger fires to make sure that containment was reached quickly,” said Dan Quinones, Fire and Aviation Staff officer with the U.S. Forest Service Rogue River-Siskiyou National Forest. Much of the success was attributed to increased manpower, including dozens of hand crews, engines, and even a slew of helicopters and smokejumpers.

“This is roughly four times the amount of assets we currently have on the Siskiyou National Forest,” Quinones said of their resources at the peak of the season. He went on to say they have an extensive contractor base, and utilizing that to its fullest can actually save money.

“Look at costs initially, they may seem fairly elevated, but if we have a large fire, it’s minuscule. If we can keep our fires small and keep them in a small footprint with those increased resources, we are actually gaining dollars,” he said.

When asked about the impact of the vaccination mandate and national labor shortage on hiring efforts, agencies did say there were concerns over hiring because of the amount of seasonal positions they need.