It was a normal Thursday as Douglas and Janice Bonham drove from Roseville, California to Salem to see their son’s new home.

Along the way, trouble set in.

“We were joking about something, and Doug said ‘I-‘… and I looked over and he was gone, he was just limp in the seat,” said Janice.

She quickly took action. “I took the wheel, put the car into neutral, got his foot off the accelerator, and just kind of glided over to the center divide.”

Luckily, no other cars were around on the freeway. “I don’t know how I did that, but I did,” she said.

She put the car into park and listened as dispatch told her to lay her husband onto the ground and begin CPR. At the same time, ODOT Transportation Maintenance Specialist, Bobby James, noticed a frantic Janice in the median. 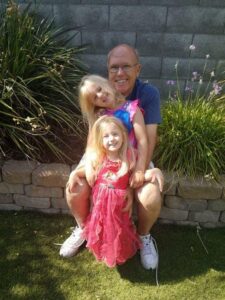 Douglas Bonham with his two granddaughters, Baylee and Kayla.

“The wife was assisting her husband in the driver’s seat and that for me was the trigger point to check it out. That was strange,” James said.

Janice was struggling to help her husband out of the car.

“I saw the wife, Janice, getting a blanket out of the car and I walked up to the driver seat,” James said. “I went to the back, got a blanket, and just as I was turning to go the front of the car, up comes this big truck with this angel sitting inside and later found out his name was Bobby James with ODOT,” she said.

As luck would have it, James has over 20 years of previous medical experience as a volunteer firefighter and EMT.

“I noticed his face was blue, which means he probably wasn’t breathing. I checked his pulse and started CPR.”

An Oregon State Trooper came around and took turns doing CPR with James, bringing Douglas back before the ambulance came. Janice says she found out in the emergency room, Douglas lost his pulse again in the ambulance.

Doctors told him he’d suffered a severe heart attack, commonly called the widow-maker, and had a stent put in place.

Douglas suffered temporary amnesia from the traumatic event, saying, “I don’t remember anything all the way through my brief stay at the hospital.”

Although his family prepared for the worst, Douglas came around and is now on the road to recovery.

“I can’t thank Bobby James with ODOT [enough]… I mean, it was just lucky for him to be there at that time. It was a blessing,” said Douglas.

Douglas and Janice’s son, Mark, wants to extend his gratitude to James, as well. “I want to thank Bobby James, the doctors, and nurses at Asante, if it wasn’t for all of them – my daughters wouldn’t have a grandfather right now, I wouldn’t have a father and my mom wouldn’t have a husband. We’re very grateful.”

The chaotic event has left an impression on James, too.

“Out of all the patients I’ve come across, this has certainly been one of the most emotional experiences for me, just understanding how much good came from it.”

The Bonhams still plan on visiting their son’s home in Salem… however, they say they prefer a flight over driving on I-5, again.