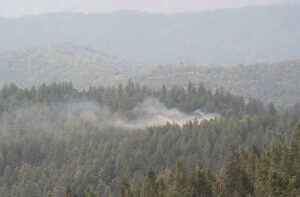 The Oregon Department of Forestry Southwest District says around 14 fires in its district started because of lightning Friday evening.

Most areas where fires have started are in steep terrain causing firefighters to hike up to fire lines, but ODF says so far, all the fires are small and under control.

“We have canceled days off from Thursday into Sunday because we need everyone, all hands on deck – so that puts us at 100-115 firefighters,” said ODF Southwest Spokesperson, Natalie Weber.

Weber advises people to stay away from burning due to extremely dry conditions, despite rainfall from the recent storms.

She adds that the largest lightning-caused fire got up to about 3 acres.