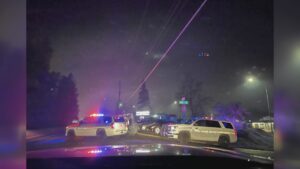 GRANTS PASS, Ore. — A man is behind bars tonight after Grants Pass Police began an investigation into the death of a Grants Pass man.

Police say 39-year-old Tobias Devin Johnson was lying unconscious on a sidewalk with blood on him near Flespy’s Bar and Grill around 9:15 p.m. Saturday night.

According to a press release from GPPD, despite efforts from Grants Pass Fire Rescue and AMR, Johnson was pronounced dead at the scene.

GP Police say Fruitdale Drive was closed off for nearly 4 hours while the scene was processed.

Police say they arrested 42-year-old Paul Dayton in connection with the murder nearly 16 hours after the incident.

“Through our detectives working throughout the night from the time of call which was 9 o’clock last night until noon today, they were on this the entire time working and doing follow-ups and leads to locate the suspect, get him into custody to make sure nothing else would happen to anyone in the community,” said Grants Pass Police Captain Jim Hamilton.

Police say Dalton is facing charges for murder in the 2nd degree as well as unlawful use of a weapon.