A pickup truck went into upper klamath lake off of highway 1-40 early this afternoon. Police and medical crews were called to the accident scene near the foot of Doak Mountain shortly after noon.

“i just heard a big bang, and looked in my rear view mirror, and he was heading to the bank, water up to about his head, and with his dog – he was coming down off Doak Mountain, just drove right into the lake.” -Steve Tuter, Witness.

Police haven’t released the name of the driver, who was taken by ambulance to sky lakes medical center. The man’s dog is being cared for by witnesses, who helped warm them up in an SUV after the crash. 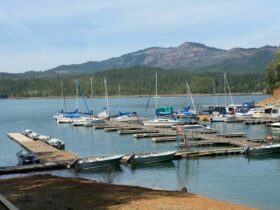