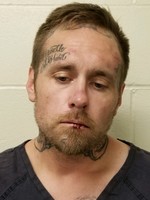 GRANTS PASS, Ore. — A suspicious backpack at the Grants Pass Walmart led to the arrest of a wanted felon out of Colorado. Grants Pass Department of Public Safety reported late Wednesday night that they got a call from Walmart employees about an abandoned backpack with a firearm and several ammunition magazines inside.

Police said they then got another call about a man who came into the store, agitated and yelling, claiming to be the owner of the backpack. That man was identified as 37 year old Todd Allan Word from Colorado. Police said Word was connected to a home burglary reported over the weekend and has a felony warrant out of Colorado, as well as an extensive criminal history. Police said Word tried to run when they arrived. They were able to get him into custody after a struggle in the parking lot.

During that struggle, police said a woman identified as Word’s girlfriend drove up to them and started to approach. Police discovered two children in the vehicle she was driving.  She was detained for questioning as officers were unsure if she was involved in this incident or the previous burglary. She was ultimately released as the case is being investigated.

During the incident Word told police he was having medical issues. Police suspected possible use of illegal narcotics. Word was initially taken to Three Rivers Community Hospital, where he was treated and released. He was then taken to the Josephine County Jail on several charges.