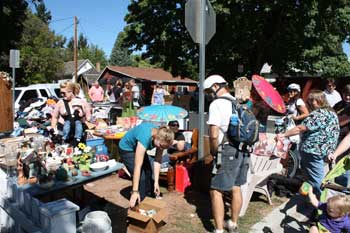 Annual Citywide Yard Sale kicks off in Jacksonville this weekend

Ore.- Last year, fires were not restrained to our forests as we saw them burn quickly and intensely through whole towns.

According to Oregon’s Climate Change Institute, intense fire seasons are something we’re going to see more of in the future.

“‘It’s tragic that trees are burning but you know, that’s not about my house.’ when we saw that happen in downtown Talent and downtown Phoenix were burning,” said Ashland Fire and Rescue’s Chris Chambers. Chambers, the Forestry Division Chief, says fires don’t just happen in dense forest.

The Rogue Valley personally experienced the threat of several wildfires last year. But experts say fires so close to towns and cities isn’t an anomaly; it’s becoming the new normal because of climate change.

“I do get from a lot of people the feeling that it is something that is going to get worse and be bad in 2050 or 2080. The reality is, its been happening for decades and we are really starting to feel the first effects of it here now in southern Oregon,” Chambers explained.  He says predictions show that Oregon is going to get more frequent and intense wildfires.

The most recent of these predictions come from the Oregon Climate Change Institute’s biennial climate assessment.

According to her, its part of the natural cycle for most plants, but climate change is making it more dangerous for humans.

“Pretty much every ecosystem everywhere in most of the country, most of the world, evolved with fire to some extent. The question is how often, how intense of a fire, how large of a fire,” she said. She also says that the threat of wildfires does not have a single simple solution, like thinning down forest land.

“But the notion that ‘gosh, if only we removed more vegetation’, that is not a solution. The scientific evidence does not support that being a uniform solution,” Dr. Fleishman said.

Both Chambers and Fleischman agree that future wildfires will be made worse by multiple factors. There will be hotter and hotter temperatures that will dry out plants to fuel fires, plants that are flourishing because Oregon is experiencing more rain rather than snow. There is also the threat of dangerous winds, like the ones that fed the Almeda fire in September.

“We’re all on notice. This is an entirely different time to live in. What people experienced in the past does not apply anymore to the future,” he explained.

The Oregon’s Climate Change Institute predicts that the size of wildfires in Oregon will more than double over the next few decades. ODF reported that in 2020, 1,221,324 acres of land burned in Oregon.