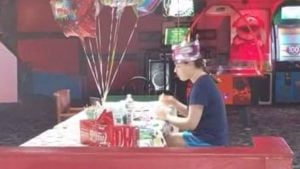 Bangor, Maine (NECN) — A photo of a Maine teenager sitting by herself at her birthday party is going viral and prompting people to send her cards.

The photo of 18-year-old Hallee Sorenson was shared on Facebook by her cousin, Rebecca Guildford of Oxford, Massachusetts, who wrote that Hallee has autism.

She described the heartbreaking scene at Sorenson’s last birthday party — the teen had sent invitations to classmates and other friends, and was excited to go bowling with them.

Guildford wants her cousin’s next birthday, in July, to be special. She is asking people reading her Facebook post to send birthday cards.