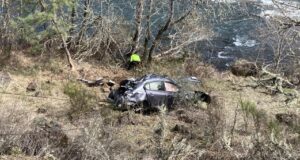 Police at the scene said it happened around 10:30 in the morning. After traveling down the steep hill, the car settled just before hitting the water. One lane of Highway 62 was closed while the car was towed off the hill.

Police said the man was unconscious and sustained injuries during the crash, but no further details were given about his condition. Firefighters had to push the car up in order to get to the driver.

Deputy Derreck Moore with JCSO said Fire District 4 got the driver out of the vehicle and transported him by boat up the river. He said that’s where they met Mercy flights, where he was then transferred to the hospital.

Deputy Moore said there was a witness who claimed the driver was on his phone right before the crash, they believe speed was also a factor.