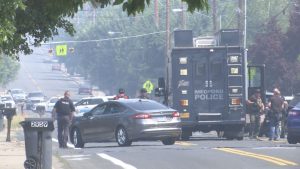 MEDFORD, Ore. — Around 12:40 P.M. Medford Police received a call saying there were shots fired at a home on Nome Ct., just off of Delta Waters Rd. in East Medford.

Lieutenant Justin Ivens with Medford Police said the caller told police a male subject was firing shots in the front yard of a home. Once officers arrived on the scene they were unable to locate the subject.

Medford Police, Emergency Medical Services and the SWAT team were all on scene.

At 4:43 P.M. Medford Police reported that the incident had turned into a barricaded subject event and were asking neighbors to stay inside and out of the area.

At 4:48 P.M. Medford Police reported they had the suspect in custody and were working to open the area up quickly.