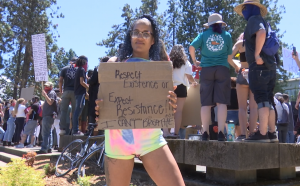 MEDFORD, Ore. — The death of George Floyd and the movement it has brought against police brutality and reforms of the criminal justice system are affecting cities across the country.

Medford is no exception.

Both say there is no place for racism in any branch of government or department across the country, especially in law enforcement.

“It always breaks my heart when something despicable happens within the law enforcement community and brings a tarnish to the badge. I feel very strongly that there are good men and women out there practicing the profession of law enforcement and those who are not doing that need to be held accountable,” said Sparacino.

“I’ve literally gone multiple times now down to downtown Medford into the protests and heard people speak about the issues. And that’s how any elected official, but especially the mayor needs to be doing… needs to be listening to all the different voices that we have and coming up with solutions,” said Stine.

Both agree the city is lucky to have a police department that is forward thinking and with no tragedies like the George Floyd incident.

Stine said there could be different things to implement and improve upon, such as training and continuing to encourage diversity among the police force.

Sparacino says from his past experience, MPD follows the pillars that the ‘Task Force on 21st century Policing’ recommended during the Obama administration.

But he says all policies and procedures are hollow unless there’s good supervision to enforce them, which he says is the case currently.