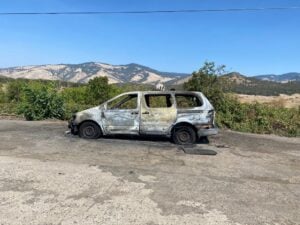 ASHLAND, Ore. — Firefighters say a car was deliberately set on fire near Emigrant Lake roughly a half hour after the Almeda Fire started in Ashland last Tuesday.

The Jackson County D.A.’s Office says no local agency has sent charges to its office.

Greensprings Fire says a person was there when firefighters arrived to a flaming car around noon last Tuesday near Emigrant Lake.

The agency says it was lucky it arrived when it did, as it was already responding to the Almeda Fire.

It says the car had a propane tank on top and was fully engulfed in flames.

The agency tells us the fire was deliberately set.

A witness who lives in the area says a man was standing outside the car, which he assumed had broken down or overheated.

“It looked like the individual was standing quite a ways a way distressed with his head in his arms and he had pulled some of his belongings out of his car in an attempt to save some of his stuff,” said Kevin Lee, a witness.

Ashland Police Chief Tighe O’Meara says he’s familiar with the case and has passed the information to detectives investigating the Almeda Fire.

At this time, he says there is no reason to believe it’s connected to the Almeda Fire.

We’re still waiting to hear back from law enforcement about the status of its investigation.