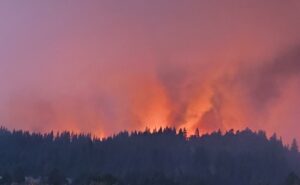 KLAMATH CO., Ore.- Firefighters are increasing containment on the Bootleg Fire, and now we know what caused it two weeks ago.

Fire officials confirmed today that the Bootleg Fire was caused by lightning.

The nearly 400-thousand acre fire was first discovered on July 6th. The fire started on U.S. Forest Service land, and the department handled the investigation into the ignition site.

Investigators blocked off the area and looked for all evidence. They say the origin of the fire was so far from roads or homes, making a human cause far less likely.

It’s all evidence based – and with lightning, firefighters say that evidence is easy to find.

“Lightning has a signature when it hits trees and stumps. Lightning often strike in one spot. We often get lightning storms so we can track those, correlate that with the weather data. Correlate that with other strikes in the area,” explained Marcus Kauffman with ODF’s Incident Management Team at the Bootleg base camp.

Current, more agreeable weather is helping over 2,000 fire personnel secure existing fire lines. The fire is currently 32 percent contained. Most of the growth is on the southeastern edge of the fire.