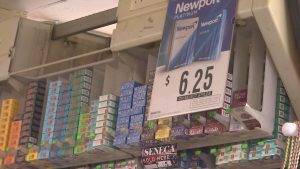 Medford, Ore.- The legal age to buy tobacco products in Oregon is changing. Starting January 1, 2018, Oregon will become the fifth state in the nation to increase the minimum age from 18 to 21.

“Most of the customers that we get in here are over 21 so I think it might a little bit. I have been talking to some of the 18-year-olds and asking them how it’s going to affect them and they said that they will maybe just not buy it anymore,” Amara Leventin, an employee at West Hills Country Store and Deli said.

Governor Kate Brown signed the bill into law back in August, but it hasn’t yet been enforced.

“I think raising the limit does make kids at age 18 really think about it a little more because alcohol is 21 and it’s a similar thing,” Leventin said.

If stores sell to anyone under 21 they will face fines. The employee could have to pay $50, whereas store managers would receive a fine of $250 and store owners $500.