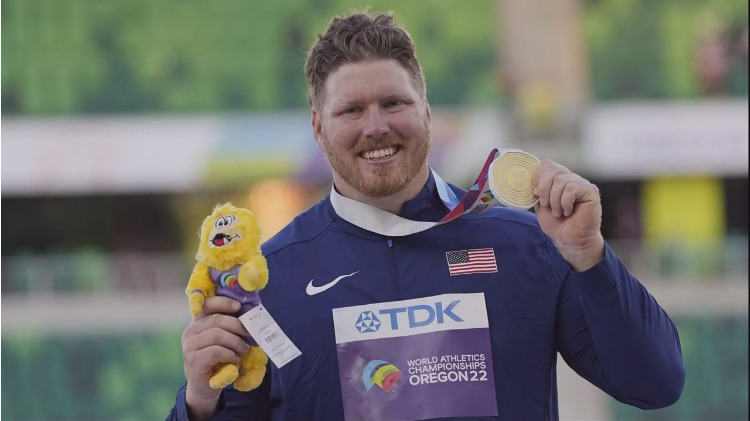 This was Crouser’s first world championships title. It comes just over a year after he broke the shot put world record during the Olympic trials in Eugene in June 2021 with a throw of 76.69 feet.

The two-time Olympic gold medalist is among dozens of Oregon elite athletes participating in the championships, which runs July 15-24. Crouser, along with  Allyson Felix, were named as captains for the U.S. Track and Field team at the first world championships on American soil.

From Boring, Ore., Crouser graduated from Sam Barlow High School in Gresham in 2011.

Crouser has a long record of achievements. He won the silver medal at the last world championships in Doha in 2019. Last year, he made history at the Tokyo Olympics when he won the gold medal in the shot put and broke his own Olympic record with a throw that went 76 feet, 5 ¼ inches. It marked Crouser’s second consecutive gold medal in the shot put following his win in Rio in 2016.

The World Athletics Championships is considered international track and field’s biggest event outside the Olympics. This is the first time the championships will be held in the United States since it began nearly 40 years ago. More than 1,900 athletes from nearly 200 countries will compete in the competition.

Dozens of elite athletes with Oregon ties are also taking part in events, including fifteen former Oregon Ducks representing seven countries. The University of Oregon alumni include Galen Rupp, places 19th in the marathon on July 17, and Raevyn Rogers, who will compete in the 800 meter on July 22.

RELATED: World Athletics Championships: What to know as the track-and-field competition starts in Eugene this week