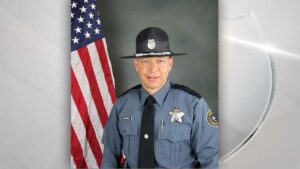 ST. HELENS, Ore. – Oregon State Police released the name of a trooper who was critically injured after a suspect rammed his patrol vehicle.

On Friday, several OSP troopers were reportedly involved in an incident involving a fleeing suspect on Highway 30 west of St. Helens when the suspect rammed an OSP patrol car and struck an OSP trooper.

Police said the trooper was taken to Emanuel Hospital where he was listed in critical condition.

Eventually, the trooper was identified as John Jeffries.

Trooper Jeffries joined OSP this past March after he retired from the FBI following 20 years of service.

OSP said, “Trooper Jeffries and his wife have spent the last 25 years in Portland, Oregon where they raised their two sons. Trooper Jeffries has spent his life in service to the public. The Oregon State Police asks that you respect the family’s privacy at this time. We also ask for your prayers for Trooper Jeffries, his family, his friends as well as the entire OSP family.”

No further details were released.