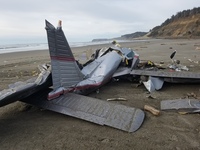 Cape Blanco, Ore., — The name of the man killed in a plane crash near Cape Blanco on Friday has been released.

80-year-old Raymond J. Wulfenstein was from Pahrump, Nevada, but Oregon State Police say he has a house in Lakeside, Oregon.

OSP say the FAA received a distress call from Wulfenstein around noon yesterday, saying he was losing his eyesight in one eye, and needed to land immediately.

No radio contact was made after that. About an hour later, Coast Guard crews found the plane wreckage on the beach near Elk River.

Wulfenstein was pronounced dead on the scene.

OSP says it is unclear if Wulfenstein was trying to land on the beach, but the crash was violent.

The cause of the crash, and Wulfenstein’s death are still under investigation.