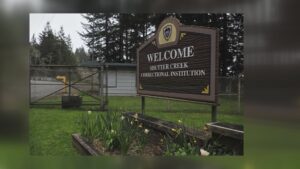 Coos County Commissioner Melissa Cribbins says Governor Kate Brown brought up the idea of shutting down the prison two years ago but they fought to keep it open.

At the beginning of 2020, Brown announced three facilities would be closing; Warner Creek in Lakeview, Shutter Creek in North Bend, and Mill Creek in Salem. Brown cited the budget and a decline in prison populations as the reason for the closures.

Warner Creek and Shutter Creek fought back saying the decision would have severe implications on the economy and beyond.

“It was an important piece of the community, there are a lot more than just those 100 jobs,” Cribbs said.  “There’s a lot of money that went into the community from the work that they contracted out. Lakeside sold them drinking water which was a big deal, and to me, the part that really matters is that there were families that were located here so they could see their loved ones at Shutter Creek, they of course have been upended also.”

Governor Brown reversed her decision to close the Lakeview facility but held steady on her decision with Shutter Creek. In July, Commissioners and representatives who fought to keep the facility received a letter saying the prison would need to close by early 2022.

Since then, all of the inmates were either released or moved to other correctional facilities in the state. The facility is now empty with the exception of a few staff members finishing up administrative work.

“The good news is, the state has put in a letter of interest to own the facility for the Elliott State Research Facility. We’ve been working for years to find a solution to the Elliott State Forest where it remains open to the public and there’s some timber harvested and there are conservation values.”

Cribbins says Oregon State University is poised to take over management of the state forest. She says the university was looking for a location where students and teachers could be near the state forest when they were working on research projects.

It’s possible the old correctional facility will be the spot OSU needs.