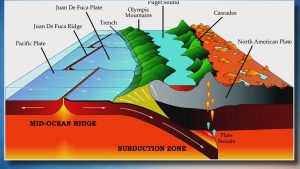 EUREKA, Calif.— The United States Geological Survey says a 6.2 magnitude earthquake hit off the coast of Northern California on Monday. USGS says it hit at 12:10 P.M. about 40 miles southwest of Eureka on the Mendocino fault line.

Strong shaking was felt in the area and even people as far as Redding could feel it.

The earthquake hit just south of the Cascadia Subduction Zone so the big question many people may be asking is, “does this quake impact the subduction zone?”

“There definitely is a relationship between the Cascadia Subduction Zone and the San Andreas.” Eric Dittmer, Professor Emeritus, SOU Geology, said. “Preliminary investigations here on the triple junction area are trying to figure out whether movement on the Cascadia triggers motion on the San Andreas and vice versa.”

Dittmer says this recent earthquake could actually have a positive impact on the subduction zone, releasing stress on the Cascadia.

He says it’s likely ‘The Big One’ won’t happen for another 50 years.