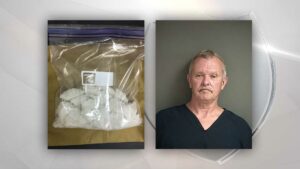 MYRTLE CREEK, Ore. – A Douglas County detective dove into a river to retrieve evidence in what’s now a drug case.

As Muniain was driving northbound on Interstate 5 near Myrtle Creek, detectives tried to stop him. Muniain slowed, but he reportedly refused to stop and continued into the city. As he was crossing a bridge over the South Umpqua River, Muniain was seen throwing a bag out the window into the river below.

After he threw the object, Muniain stopped and was taken into custody.

Muniain was lodged in the Douglas County Jail for unlawful possession and delivery of methamphetamine. More charges are pending.