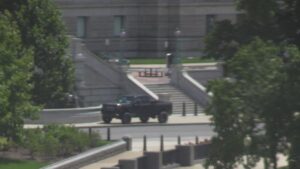 WASHINGTON, D.C. (NBC) – A five-hour standoff near the U.S. Capitol ended peacefully Thursday when a man who claimed to have a bomb surrendered to police.

After hours of negotiation, a man who claimed to have a bomb in his pickup truck surrendered to police, bringing a peaceful end to a standoff that closed down much of Capitol Hill.

U.S. Capitol Police Department Chief Tom Manger said, “The driver of the truck told the responding officer on the scene that he had a bomb and what appeared, the officer said, appeared to be a detonator in the man’s hand.”

Law enforcement officials told NBC News the man said he had a propane tank in the cab of his truck parked on the sidewalk just outside the library of congress near the Supreme Court and the U.S. Capitol.

Local and federal police officers quickly cordoned off the area. The library, the high court and several capitol office buildings were evacuated. Though, with Congress in recess, very few lawmakers and staff were in the capitol complex.

Investigators say they’ve identified the suspect, a 49-year-old man from North Carolina, who was reportedly broadcasting live on

For a time, sources said he was using a dry erase board to communicate with the officers who surrounded him.

Chief Manger said, “He gave up and did not resist, our folks were able to take him into custody without incident.”

The tense scene stirred up the fear and confusion of the deadly January 6th attack on the U.S. Capitol.

With those images fresh in their minds, police are taking no chances in Washington.

The standoff comes just days after the Department of Homeland Security warned of an elevated threat level through a combination of factors from grievances over COVID restrictions to the approaching 20th anniversary of 9/11.