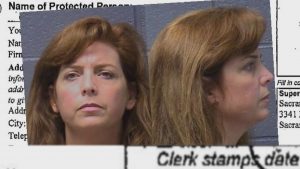 Sacramento, Calif. — The stepmother of missing Portland boy Kyron Horman didn’t show up to two scheduled court appearances Friday afternoon, according to KGW-TV in Portland. The NBC affiliate sent an investigative reporter to Sacramento, where Horman was expected to appear at the Yuba County Superior Court in connection with a gun theft charge.

Horman’s lawyer appeared on her behalf in Yuba County.

“Why was Ms. Horman not here today? She’s not required to be here,” said her attorney, Amit Singh.

Until recently, Horman was employed by Right at Home senior care. The company said in a statement that a background check never showed Horman’s previous arrest. She quit in November.

Horman now apparently also goes by her maiden name, Terri Moulton, but it is not clear whether she officially changed her name.

She was expected in court Friday for the charge of grand theft firearm, after her former roommate accused her of stealing a handgun from a safe.

Horman declined to talk to KGW about the charge, however she told People Magazine she’s innocent.

Horman was also accused of domestic violence by a man who describes himself as Horman’s ex-boyfriend. He accused Horman of threatening him with a knife. A temporary restraining order was filed against Horman but she has not been charged with a crime related to the accusation.

Terri Horman is divorced from Kaine Horman, the father of Kyron. The boy was last seen on June 4, 2010 at Skyline School in Northwest Portland.

The boy’s stepmother has long been the focus of investigators, although she has never been charged with the crime or officially named a suspect.