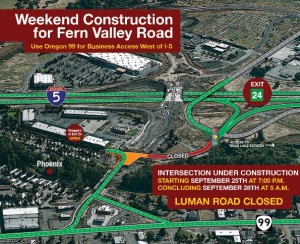 Phoenix, Ore. —  Drivers in Phoenix can expect a major traffic detour later this week. ODOT crews will be closing the exit 24 connection between I-5 and Oregon 99 this weekend. The work is part of the Fern Valley Interchange project that’s set to be complete next year.

The closure will begin Friday, September 25th, at 7 pm with crews wrapping up work by 5am Monday, September 28th. Detour signs will be posted for those trying to get to 99 from I-5.