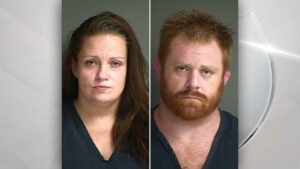 ROSEBURG, Ore. – Two people are in the Douglas County Jail charged with murder.

The Douglas County Sheriff’s Office said in mid-August, detectives started investigating the disappearance of 41-year-old James Leroy Hood of Camas Valley. The last known sighting of Hood was on March 11, 2021.

After conducting interviews, police learned he had been murdered in a barn near Winston. His body was reportedly still on the property.

On August 17, police searched the location and found Hood’s remains.

Further investigation led to the arrest of 35-year-old Ashley Tyshanne Reynolds of Roseburg and 33-year-old William Levi McClure of Winston.

They were lodged in the Douglas County Jail on August 25.