Houston, Tex. (CNN/KTRK) — A reporter in Texas went from reporting the story to part of the story when he waded into floodwaters to help a man escape from a sinking car.

The man can be seen struggling to swim from the quickly-submerging vehicle when the reporter rushes to his aid.

Heavy rains caused a dilemma for some Texas drivers on the roads of Houston. Strong storms swept through the area early Monday morning, prompting a flash flood emergency for parts of Grimes, Waller, and Harris counties.

High water forced some drivers on the top of the vehicles, waiting for rescue. Roads were shut down and bus and rail service in Houston were stopped because of the worsening weather conditions.

A flash flood watch is in effect through Tuesday morning for parts of Southeast Texas. 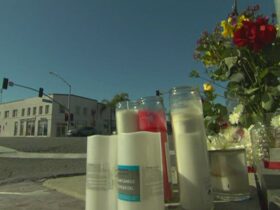