The 2022 Winter Olympics may not be the most romantic place to spend Valentine’s Day, but that’s just another sacrifice some athletes must make to compete at the pinnacle of sport. Having already secured valentines, these athletes are performing their best in hopes of securing an Olympic medal.

See which couples are spending Valentine’s Day inside the Olympic Village:

Ice dance is the biggest “Who’s dating who?” of the Olympics. With all the training and time spent together, it wouldn’t be surprising if figure skating was discovered to be the Olympic sport with the most couples. Here’s a quick dive into some passionate pairings.

All is fair in love and the Olympics. Figure skating fans may know that American ice dancers Madison Hubbell and Zachary Donohue once dated before breaking up to focus on their career as an ice dance team. Hubbell is now engaged to Adrian Diaz, a Spanish ice dancer, who is partnered with Olivia Smart. Smart and Donohue also have a little bit of history, having dated previously. Donohue’s current love interest is Australian figure skater Chantelle Kerry, who is not competing at these Olympics.

The skaters have successfully made it work on and off the ice. Both teams competed on Valentine’s Day, with Hubbell and Donohue taking the bronze after being awarded a personal-best free dance score in their final appearance on Olympic ice. Diaz and Smart finished in eighth.

Madison Chock and Evan Bates started skating together in 2011 before becoming a couple in 2017. During the 2022 Winter Olympics, Chock and Bates impressed the world with their talent and chemistry when they helped the U.S. secure silver in the figure skating team event and finished fourth in the ice dance competition. Relive their rhythm dance here.

Cornelius Kersten and Ellia Smeding are partners in life and business. They’re coffee roasters by day and speed skaters at night. The British couple started Brew ’22 to successfully fund their Olympic journey. They celebrated Valentine’s Day in the Olympic Village with a full spread from KFC.

Slopestyle and big air snowboarders Red Gerard and Hailey Langland met in 2012 and competed together as Burton team riders. The pair started dating five years later, just before the 2018 Winter Olympics. Gerard won the gold in the snowboard slopestyle competition, but Langland was unable to reach the podium in either discipline. Ever since, Gerard and Langland have been traveling and competing at the same events together. They both qualified for Monday’s snowboard big air final at the 2022 Winter Olympics after stomping solid runs in the qualifiers on Valentine’s Day. How romantic!

Alpine skiers Mikaela Shiffrin and Aleksander Aamodt Kilde are relationship goals. Throughout the Games, Shiffrin and Kilde have repeatedly shown affection and admiration for each other. When Shiffrin skied out of the slalom event at the 2022 Winter Olympics, Kilde supported Shiffrin by posting, “…all I see is a top athlete doing what a top athlete does!” Shiffrin posted a good luck photo for Kilde and a Valentine’s Day photo.

Shiffrin is scheduled to compete in the team event and will become the second woman to ski six in Olympic events. Kilde, who represents Norway, won silver in the men’s combined and secured bronze in the super-G.

The American bobsled power couple have been married since 2014. Elana Meyers Taylor and Nic Taylor welcomed a baby boy, Nico Taylor, in March 2020 and brought him with them to the Games. Meyers Taylor competed in the inaugural Olympic monobob event and won silver, and will pilot her sled in the two-woman event. Her husband serves as an alternate for the U.S. men’s team.

Meyers Taylor will compete in the two-woman event at 7 a.m. ET on Feb. 18.

Canadian athletes Blayre Turnbull and Ryan Sommer compete in two very different events, but their differences make them stronger. Turnbull plays on the women’s hockey team and Sommer is a bobsledder. The couple have been engaged since April 2021, but due to training and the pandemic, they were kept apart for three months leading up to the 2022 Winter Olympics. The two finally reunited at the Opening Ceremony.

What better way to celebrate Valentine’s Day than with two gold medals? American freeskiers Ashley Caldwell and Justin Schoenefeld are bringing home the gold after winning the mixed team aerials finals with teammate Chris Lillis. Caldwell and Schoenefeld enjoy sharing the same training and travel schedules, with Schoenefeld supporting her after she missed the podium in PyeongChang.

Brazil’s Nicole Silveira and Belgium’s Kim Meylemans directly competed against each other in the days leading up to Valentine’s Day. The power couple competes in skeleton and met at a World Cup event where Meylemans was on the track and Silveira was a volunteer. The pair have found peace in competing in the same races because they’re racing the clock for the best time, not each other.

Marie-Michele Gagnon, a Canadian skier, has been with Travis Ganong, an American skier, since 2008. Both Alpine skiers tore their ACLs within two months of each other in December 2017 and January 2018, missing the 2018 Winter Olympics. Gagnon and Ganong recently got engaged.

Ganong placed 20th and 12th respectively in the men’s downhill and super-G events. 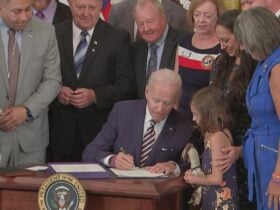