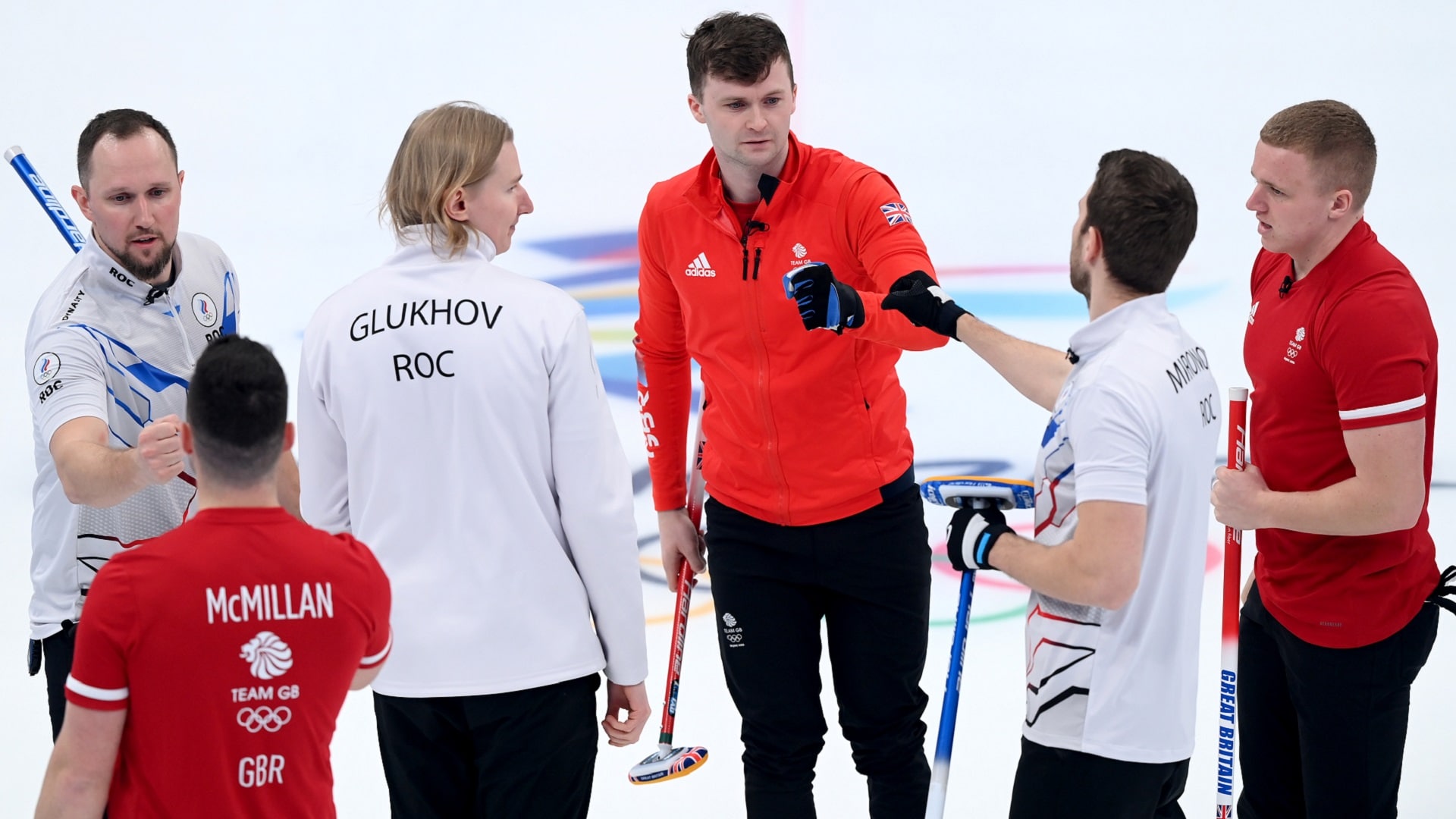 Two teams with shots at reaching the men’s curling semifinals both did damage to those hopes with losses Wednesday in Session 11 of play.

Switzerland and the team from the Russian Olympic Committee both added losses to their record and effectively eliminated themselves from moving on to the medal round in the process.

Here’s a look at all three games Wednesday.

Great Britain jumped ahead of Sweden for the No. 1 spot in the standings with an 8-6 win over the ROC, and effectively ended ROC’s semifinal hopes in the process.

ROC skip Sergey Glukhov’s final throw in the first went for a double takeout of an outside stone and another on the button, but the throw missed the inside stone and slid out of the house, setting up a draw for three points for Bruce Mouat and Great Britain to take an early 3-0 lead.

GBR added to its lead with another point in the third and a steal of one in the fourth.

The ROC began its comeback attempt in the seventh with two points after a takeout by Glukhov on the final throw.

Glukhov helped his team get two more in the ninth to get within one. But Great Britain was effective in the tenth at keeping the house clear to prevent the ROC from getting the chance at two points and the win. Instead, Glukhov had to settle for placing ROC’s finals stone all alone in the house, setting up an easy takeout by Mouat for one point and the win for Great Britain.

The ROC finishes round robin play 4-5 with the loss. Glukhov’s team, tied for fifth in the overall standings, will now have to wait for results from Wednesday’s final session of play to see if they can sneak into the medal round.

China’s men’s curling team continued to surprise some of the toughest teams in the field, this time defeating Switzerland, 6-5, in the penultimate session of round robin play.

China’s Ma Xuiyue came up with a takeout that stuck in the 4-foot to put two on the board and even the score at 3-3 going into the half.

The teams blanked the sixth, and then traded single point ends from there to keep the score tied, 4-4, after eight.

After Switzerland scored one in the ninth to take a 1-point lead, China played the tenth going for two points rather than just one to force extra ends.

Benoit Schwarz’s final throw for Switzerland was just inches too light, leaving just enough space between it and China’s stone lying in the back of the house to give Ma the room he needed to take the rock out.

Ma’s hammer throw went into the house with the perfect amount of weight to get rid of the Swiss stone and stick in the 8-foot for two points and the win.

China finishes round robin play 4-5, tied with ROC for fifth in the standings. Their chances of moving on are slim, though they have not been officially eliminated.

Switzerland will finish round robin play on Wednesday against Sweden at 8:05 p.m. ET. They will need to win and also get help to move on to the semifinals.

Italy picked up its third win of the 2022 Games with a 10-3 victory over Denmark in seven ends Wednesday.

Italy put two on the board in the second on a huge takeout shot by Joel Retornaz.

Retornaz’s team then stole two more in the third and another in the fourth to go up 5-2 early.

Italy scored four in the sixth to take a commanding 9-3 lead.

Denmark was left with a difficult double takeout attempt on their final throw of the seventh, needing to go cross the house for to remove two Italian stones and get a crucial two points. Mikkel Krause’s throw got one, but overcurled and missed the second, going out of the house. Italy instead stole one in the end to go up seven, forcing Denmark to concede the final three ends and give the Italians the win.

Italy (3-5) maintains an outside chance at reaching the semifinals, but will need help. Joel Retornaz’s team will finish round robin play on Wednesday at 8:05 p.m. ET against Norway.

Denmark (1-7), having already been eliminated from semifinal contention, will finish its Olympics on Wednesday against Team USA. Game time is also at 8:05 p.m. ET.