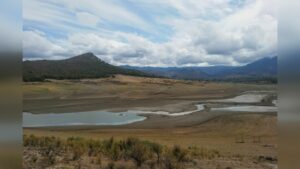 ASHLAND, Ore. — Some Jackson County lakes are at such low water levels, boat ramps can’t even be used.

No motorboating is possible on the lake currently, and it can only be used recreationally by those who can carry a kayak or canoe down to the lake shore.

The Bureau of Land Reclamation says the water level is the lower it’s been since 1992.

“At Jackson County Parks, we get a lot of questions from folks [saying] why are we letting so much water out of the reservoirs? And it’s just nice to remind folks that we do not manage water at any of the waters that we manage recreation on. We solely manage recreation facilities,” said Steve Lambert, Jackson Co. Parks manager.

Every year, Lambert says water from Emigrant and Howard Prairie Lakes are used for agricultural purposes by Talent Irrigation District.

Currently, he says both lakes are at 3 or 4 percent storage.

If we don’t get a record snowfall or rainfall this winter, Lambert says things won’t look good when it comes to recreational activities for next year.