Oakland, Calif. (CNN) — As far as city officials in Oakland, California, were concerned, the dilapidated two-story structure at 1305 31st Avenue with the cracked, rusting facade was a warehouse in disrepair.

The building’s owner received a citation in November for hazardous trash and debris surrounding the building, the second such complaint in two years. Zoning officials were also investigating complaints of illegal construction on the property. 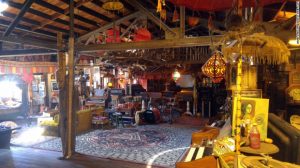 The interior of The Ghost Ship, the warehouse that caught fire on Friday, December 2.

To the artists who lived and worked there, the “Ghost Ship” was a coveted haven in the Bay Area’s gentrifying landscape of skyrocketing rents and disappearing artist spaces.

On Friday night, it became the scene of one of Oakland’s most devastating fires in recent memory.

More than 30 people were killed and the death toll is expected to rise as investigators sift through the treacherous ruins of studios, workshops and residences tucked within the warehouse: pianos, couches, beds, even mobile homes, Alameda County Sheriff’s Sgt. Ray Kelly said.

The blaze broke out during an electronic dance party where DJ Golden Donna was scheduled to perform, sending shock waves through Oakland’s tight-knit arts community. As the news spread, it seemed nearly everyone knew somebody who was supposed to be at the show or who had once passed through the warehouse, said Josette Melchor, executive director of Gray Area Foundation for the Arts, which launched an online fundraiser for victims of the fire.

It was one of many gatherings the venue’s leaseholder, Derick Ion Almena, was known to host to help pay rent on the warehouse, members of the Bay Area art community told CNN.

Most people familiar with Ghost Ship knew it had issues, that it was not quite up to code, Melchor said. So it goes for many live-work warehouses, as they struggle to accommodate demand from artists for affordable spaces. Fear of losing a home or displacing others keeps some people from reporting possible violations, she said.

“People are desperate for places,” she said. “It’s one of those things where you don’t want to report something you see because you know how hard it is for people to find spaces.”

The Ghost Ship fire represents a rare case in the extreme, she said. Most art spaces go to great lengths to maintain safe environments, especially when they open to the public for events.

“It’s one of those Catch-22 situations. A lot of us knew it was unsafe and it could have been fine had there been a smaller amount of people,” she said. “But when you start having big parties it crosses the line.”

Not enough spaces for ‘artistic expression’

Visitors described navigating a cluttered maze of old furniture and artwork, ladders that led to loft spaces, makeshift rooms partitioned by colorful curtains. An improvised staircase constructed of wooden pallets was the only way to get from the first floor to the second, where the fire started, Kelly said.

“If my parents had walked in they would have been probably in total shock at the total disarray and the fact that people actually live there. But for me it felt just a little more cluttered than average,” said 24-year-old Diego Aguilar-Canabal, a freelance writer and musician in Berkeley who attended a party in the warehouse in 2015.

“These are people on the fringes of our economy who are just kind of getting by doing what they love and they do get overcrowded in these spaces that are not designed to be residential.” 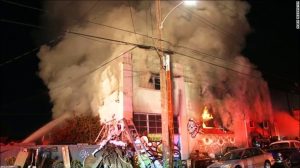 A fire broke out Friday night, December 2, during a party at the two-story Ghost Ship warehouse and artists’ studio in Oakland, California.

The last permitted use of the building was as a warehouse, the city of Oakland said. There was no evidence of sprinklers and the building only had two exits, Kelly said in a news conference Sunday. As the fire spread, people jumped out of windows to escape, Kelly said.

Almena is believed to have lived in the warehouse with his wife and three children but he said he was not staying there the night of the fire. He did not return repeated calls for comment and officials have not confirmed whether they have spoken to him.

Most of the time it served as a “live-work” warehouse: part commune, part artists collective. Photos posted online show a space with a ceiling resembling a ship’s hull, covered wall to wall with furniture, instruments and tools of the artists’ trades. “It was a beautiful space that allowed artistic gatherings to happen,” said Bay Area artist Chris Dunn, who last attended an event there in 2015. “There’s not enough spaces for this kind of artistic expression of music and gathering.”

Live-work warehouses are becoming increasingly common in urban areas as the rising real estate market squeezes out artists and longtime residents of formerly bohemian enclaves including San Francisco and Oakland.

As more people seek refuge in the warehouses amid the housing shortage, the harder it gets to keep everything up to code, Dunn said.

“To have that type of living space totally aboveboard, [landlords and tenants] would be completely priced out,” he said. “There is a fear if someone blows the whistle on a safety issue that it’s going to lead to them being evicted, because there’s so much money tied up in real estate,” he said.

Warehouse parties are a staple of vibrant arts communities around the world without the same tragic ending, he pointed out. He hopes this case leads to constructive dialogue between the city and community stakeholders about creating safe spaces for the arts. The worst thing that could happen would be a “draconian” crackdown on remaining spaces that forces artists onto the streets, he said.

“There’s a very delicate balance going on,” Dunn said, “but clearly it’s gone too far in the wrong direction in this situation, where the unregulated nature of the warehouse turned into tragedy. That can’t continue.”