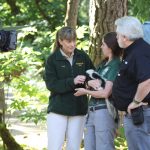 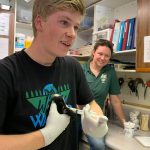 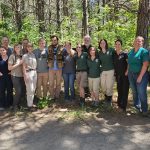 GRANTS PASS, Ore. – In the coming days, a local wildlife rehabilitation facility will be featured on a nationwide TV program.

This past summer, Terri Irwin — the wife of late wildlife conservationist and TV personality Steve Irwin — came to Wildlife Images with her son, Robert, to record video for their TV series, “Crikey, It’s the Irwins.”

Wildlife Images said the family was invited to document health checks on Kodi the brown bear and Brady the cougar.

Terri Irwin assisted with the checks as a crew recorded video that would eventually be aired on an episode of “Crikey, it’s the Irwins” on Animal Planet on November 9.

On November 5, Wildlife Images said their facility will actually be featured on two separate episodes, the previously announced November 9 appearance and another on November 16.

A Wildlife Images spokesperson said, “In recognition of the upcoming episodes, and Steve Irwin Day, Wildlife Images is offering free admission on Friday, November 15 with complimentary encounters with Wildlife Images’ Animal Ambassadors. Thanks to the generosity of the Irwin family we will also be raffling off a prize package of items from the Australia Zoo signed by the Irwins.”

Before his untimely death, Steve Irwin visited Wildlife Images to record video that would later be shown in the first episode of his show, “Crocodile Hunter,” in 1997.

To learn more about Wildlife Images, visit their website at http://www.wildlifeimages.org.