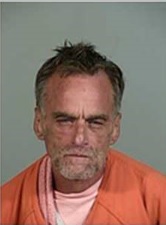 Hawkinsville, Calif. — A Yreka man is behind bars accused of breaking into a Hawkinsville couple’s home and attempting to sexually assault an elderly woman. It happened in the early morning hours of Saturday, July 28.

Deputies were called to Hawkinsville-Humbug Road, which is in the Hawkinsville area. According to the Siskiyou County Sheriff’s Office, Gary Lowell Fitzhugh, broke into the home, burglarized it, and then attempted to sexually assault a woman as she slept. Sheriff Jon Lopey says when Fitzhugh was confronted by the victim’s husband, he took off, arming himself with a large knife.

While deputies were investigating, Fitzhugh reportedly returned to the home. Sheriff Lopey says the suspect refused to drop the knife and threatened to kill the deputies.

According to Sheriff Lopey, one deputy managed to use his Taser on the suspect while the other deputy covered the suspect with a lethal force option, but the taser was ineffective.

“The suspect was able to resist the effects of the Taser and attempted to flee the scene,” Sheriff Lopey says, adding, “The suspect ran a short distance, dropped the knife and fell to the ground where he was taken into custody without further incident.”

“Typically, non-lethal force measures cannot be used against a suspect armed with a deadly weapon where there is an imminent threat of great bodily harm or death.” Sheriff Lopey explains, “but the deputies in this case were able to resolve a potential deadly force encounter without resorting to lethal force. ”