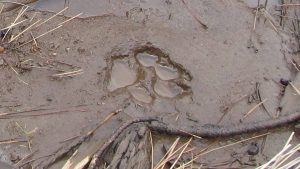 On January 4 a cattle producer found a dead calf on private ranchland about six miles southeast of Prospect, in the Boundary Butte area. The 250-pound calf was found about 500 yards from a residence.

The Oregon Department of Fish and Wildlife determined the calf was killed by wolves. Evidence implicated the Rogue Pack.

On January 10, another dead calf was found close to a residence in the same area. GPS collar data placed wolf OR54 within ten yards of the carcass at 2:00 that morning. OR54 travels with the Rogue Pack. ODFW believe the calf died during the night of January 9.

The next day, ODFW officials found yet another calf. It’s estimated the calf died on the night of January 10. It was determined to be yet another kill by the Rogue Pack.

The Rogue Pack is known to roam between Jackson and Klamath Counties.

ODFW said though they’re not required, non-lethal measures can be used to reduce livestock depredation.