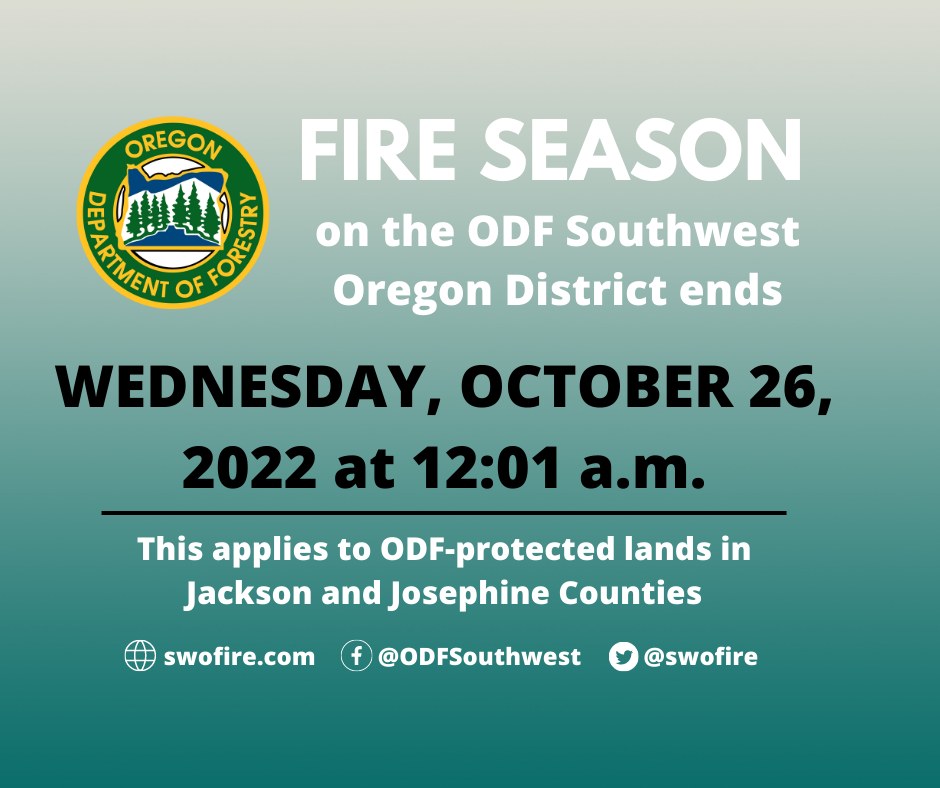 CENTRAL POINT, Ore. – On October 26, the 2022 fire season will be over on lands protected by the Oregon Department of Forestry in Jackson and Josephine Counties.

“We’ve seen longer seasons that have hung on into late October and November before, but it’s been unseasonably dry this month,” said Tyler McCarty, Southwest Oregon District Forester. “Southern Oregon is very fire prone, but the heightened risk has passed at this point with the amount of rain we’ve received this week.”

This year’s largest fire in the district was the Rum Creek Fire, which burned 21,347 acres. It destroyed two homes, six structures, and took the life of contract firefighter Logan Taylor.

“Logan paid the ultimate sacrifice to protect southern Oregon, and we’re so humbled and appreciative of how the community joined us in honoring him and his service,” McCarty said. “We’ve been fortunate on the Southwest Oregon District to not lose many firefighters, and Logan’s passing has touched everyone in our firefighting community. Our thoughts and prayers are still with his family and friends every day.”

ODF said, “Despite challenges from dry fuels, hot temperatures, and windy conditions throughout the season, ODF firefighters kept 96.6% of fires at 10 acres or less within Jackson and Josephine counties, just shy of ODF’s protection goal of 98%.”

ODF said although fire season’s ending, the chance of a fire starting is always around, especially with an increase of prescribed burns. While the declaration includes state, private, county, city and Bureau of Land Management forestlands in southwestern Oregon, many fire agencies still require permits for burning.

You can learn more about fire season and fire prevention at http://www.swofire.com