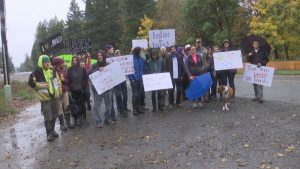 Cave Junction, Ore., — Family and friends of Jarred Houston are still looking for answers, three years after he and Robert Calvin were killed on Highway 199 by a hit and run driver.

Houston’s car had broken down when police say Calvin walked up.

The two were involved in an altercation in the roadway, when they were hit.

Now Houston’s family is hitting the pavement on that same roadway, to raise awareness.

“Every march is more hope, more people see it and the cause and spread the word so hopefully someone breaks. We’re demanding answers, so it can only get harder and harder on the person who took their life. ” said Jarred’s brother, Trent Jensen.

Jarred’s family says the hardest part about him being gone, is not having his influence around.

“He really cared about people and he let you know, so I miss how he made me feel. So loved and cared about.” said Sarah.

“I miss just little things about him, just like hanging out and him being an influence to me, and having him around me when I need advice. Just having another big brother in my life that really influenced me to do good things, and be a good person and be thankful for everything. I just miss his presence. I love him with all my heart.” said Trent.