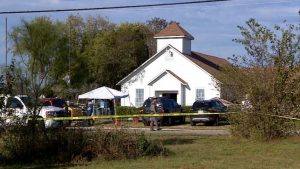 The victims range in age from 5-to-72 years old.

Kelley sprayed the congregation with multiple rounds before turning to leave. He was met outside by a resident who rushed to the scene with his rifle and returned fire.

Kelley ran to his vehicle, while Good Samaritan Johnnie Langendorff followed close behind.

“I did what I thought I needed to do which was they said there was a shooting, I pursued,” Langendorff said.

Police joined in and after a brief chase, Kelley crashed and was found dead inside his vehicle.

Kelley was a former member of the Air Force, discharged for bad conduct in 2014. Ann Stefanek, a spokeswoman for the Air Force, confirmed that Kelley was court-martialed in 2012 on two charges of assaulting his spouse and their child. He was confined for a year and reduced in rank to airman basic E-1 before his discharge, she said.

“He seemed to have a troubled past even before he enlisted,” Abbott said on “TODAY.”

Federal officials said the motive for the shooting was unclear. According to Wilson County Sheriff Joe Tackitt, Kelley’s in-laws attended the church, although they weren’t there at the time. The in-laws were speaking with investigators, Tackitt said.