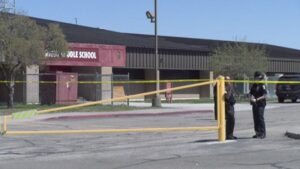 RIGBY, Idaho (NBC) – A sixth-grade girl is in custody, charged with opening fire at her school in rural Idaho. Three people were injured in the shooting before the child’s teacher ended the violence and saved lives.

Authorities are not identifying the suspect, saying only that she is a sixth-grader.

Meanwhile, this is a community in shock. Not only at the child’s young age but also at the fact that female school shooters are so rare.

Shots rang out at the middle school around 9:15 Thursday morning. Three people in total were injured, including a custodian as well as two other students. They’re expected to make a full recovery.

Christina Negrete is the mother of one of the witnesses. She said, “My eighth-grader had called me and said that there was an active shooter in the school, that she had heard three gunshots, right next to her classroom, and that she had heard a friend of hers may have been shot. And then she said, ‘I love you, I gotta go. Bye.’”

Police say the girl was disarmed by a teacher, Krista Gneiting. Her father told NBC News that she sat the girl down and gave her a tight hug. The girl repeatedly asked Krista to take the gun and kill her. Krista continued to hug her tight until the police came.

This is an investigation that is ongoing. They’re looking at possible motives and reports that the suspect posted a threatening video to Tik-Tok days before the shooting.