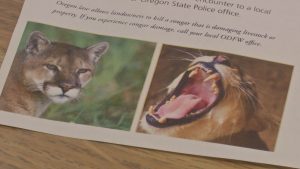 ROGUE VALLEY, Ore.– In the last couple of days local police have issued warnings about both cougar and wolf sightings.

This, just days after a mama bear and her three cubs broke into an Ashland man’s garage.

Oregon Department of Fish and Wildlife says it’s spring time and animals are out looking for food. One of their biggest targets are garbage cans.

ODFW says one of the ways to prevent wild animals from approaching your property is to try and mask the smells.

“When the garbage is picked up, clean out your garbage can, use ammonia,” said Dan Ethridge, a district wildlife biologist. “Things like that, that has a strong smell that bears won’t like.”

Another issue officials want residents to be aware of are wild baby animals. According to Ethridge, the biggest problem they see every summer are people finding baby animals alone.

“Our biggest concern is people wanting to pick up those babies thinking that they’re abandoned,” he said. “We really don’t want you to pick those up.”

Ethridge says that if you do come across a baby animal that you call ODFW or OSP and let them know the location of the animal.