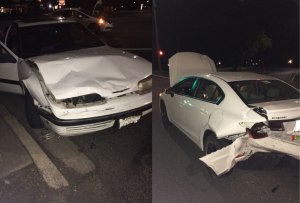 The aftermath of a crash on Peninger Road in Central Point. (Photo: JCSO)

JACKSON COUNTY, Ore. – Over the past weekend, nine people were arrested for impaired driving in Jackson County.

The Jackson County Sheriff’s Office said on Friday night, a 23-year-old man was reportedly seen leaving the fairgrounds in a state of intoxication. The man was able to drive to Eagle Point, but deputies caught him and arrested him for DUII. Investigators said his blood-alcohol content was three times the legal limit for driving.

According to JCSO, one other man was arrested of DUII Friday. On Saturday, five men and two woman—ranging in age from 21 to 58 years old—were arrested for driving while intoxicated. Three of them were leaving the fair at night.

One of the arrests Saturday night involved a 21-year-old man who rear-ended another vehicle on Peninger Road with two women inside. One of those women was pregnant. She was taken to the hospital to be evaluated.

In a separate case Saturday, a 31-year-old woman rolled her vehicle on Griffin Lane. The woman’s 2-year-old child was in the vehicle at the time of the crash. Both were taken to the hospital. The woman was cited and released for DUII, reckless driving and reckless endangering.

“Notably, deputies were alerted to two of the weekend’s cases by citizens who called 911 after suspecting an impaired driver,” JSCO said. “In each case, the caller provided identifying information and remained on the line with dispatch to help a deputy locate the suspect vehicle.

“Deputies remind people to make transportation plans before they begin drinking, whether at home or attending an event. Designate a sober driver, call a cab or rideshare service, or call a friend. If you suspect an impaired driver on the roadway, call 911 immediately.”