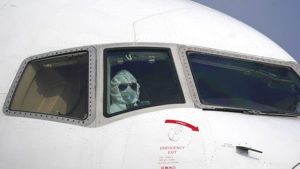 RIVERSIDE, Calif. – There are growing concerns about the coronavirus in the U.S.

The president announced a coronavirus task force overnight. It comes after nearly 200 Americans were flown out of Wuhan landing Wednesday at a California military base.

NBC has spoken with several of the passengers by phone and they say they’re completely exhausted after their 19-plus-hour journey.

No one yet is reported to be ill, but the scare over the coronavirus is growing. Not just overseas, but also here at home.

Evacuees were greeted by authorities in full hazmat suits. It was an eerie welcome home for Americans trapped in Wuhan.

Thursday morning, in isolated hotel rooms on a military base, the 195 evacuees will be voluntarily held for 72 hours undergoing medical screenings twice a day for symptoms of the coronavirus.

Dr. Chris Braden with the CDC said, “If we think a person is a danger to the community, we can institute an individual quarantine, and we will.”

Their chartered cargo plane from Wuhan touched down Wednesday. Inside the packed flight, passengers were isolated from the crew the entire time.

The evacuees were chosen from U.S. Consulate personnel in Wuhan and others were selected because of their exposure risk or health. Some families were with babies as young as a month old.

Dr. Cameron Kaiser said, “They’re scared. You’re scared. And we understand that there’s a lot about this virus that we don’t know.”

Overnight, the White House announced a new coronavirus task force that will lead the government’s efforts to monitor and contain the illness.

President Trump tweeted images from a briefing on the virus, writing, “We have the best experts anywhere in the world, and they are on top of it 24/7!”

So far, at least five people in the U.S. have been infected while another 160 are being monitored in 36 states.

At Boston’s Logan Airport Wednesday, a sick passenger was pulled off an arriving flight from Beijing.

With fear spreading as fast as the virus, people in Los Angeles are taking no chances, wearing protective masks in airports and flights, a precaution health officials say is unnecessary.

International airlines including Delta and American are canceling or suspending flights into major cities in China. Amazon is suspending all business travel there.

Some colleges like the University of Illinois are canceling China study-abroad programs, for now.

And with the U.S. still considering a travel ban to China, officials are trying to calm fears over a growing possible pandemic.

Dr. Braden said, “We do think that the risk for the general communities in the United States from this infection is very low.”

So far, more than 700 American citizens have requested U.S. government assistance in evacuating Wuhan, that’s according to a U.S. official familiar with the current situation.