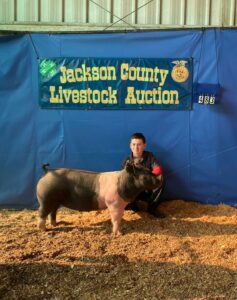 CENTRAL POINT, Ore. — After several personal tragedies, the community is rallying around one young boy and his pig. Meet 12-year-old Gage and his pig ‘Cajun‘. Showing his pig Wednesday night at the Jackson County Livestock Auction was a feat within itself, but Gage also made county fair history.

Cajun sold for the ‘highest price per-pound’ the fair has ever seen, at 120 dollars.

“We have such a generous community that supports these kids,” said Expo chairman JB Dimick. “For these businesses, these grocery stores, it doesn’t matter. They step up and support those agriculture families in times of need.”

Gage’s pig actually sold for 40 dollars more per pound than the ‘grand champion’ pig.  The Jackson County Fair tells NBC5 multiple community members and businesses pooled their money together to buy the pig.