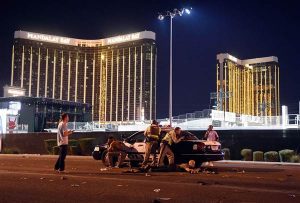 (NBC News)- A lone gunman released a rapid-fire barrage of bullets on an outdoor country music festival in Las Vegas Sunday night, killing at least 50 people and injuring more than 400 others, police said, in the worst mass shooting in modern American history.

From his room on the 32nd floor of a glitzy hotel, the shooter, identified by law enforcement officials as Stephen Craig Paddock, 64, of Mesquite, Nevada, fired shot after shot down on the crowd of about 22,000, sending terrified concertgoers running for their lives.

“People kept dropping and dropping… People were getting shot one foot away from us,” she said. “People were trying to save their friends. There were gunshots everywhere. Helping them would’ve meant that we got shot too.”

Police responded to reports of the shooting just after 10 p.m. (1 a.m. ET), and the suspect was fatally shot in the Mandalay Bay Resort, officials said.

The suspect is believed to have checked into the Mandalay Bay Resort and Casino on Sept. 28, Lombardo said, and had an “excess of ten rifles” in his hotel room.

It was not clear whether Paddock had specifically requested a room on a high floor that overlooked the concert venue or whether he had prevented housekeepers from entering his room.

The shooting is not believed to be connected to international terrorism. Authorities have not said what kinds of weapons were found.

Paddock has no criminal background, other than a citation he received several years ago that was “handled as a normal practice” by the courts, Lombardo said. He didn’t offer any more details.

The shooting started while performer Jason Aldean was onstage. Witnesses described a chaotic scene of back-to-back bullets raining down from above, lasting for up to 10 minutes.

Fellow performer Jake Owen said he was standing about 50 feet away from Aldean when the shots started.

“It got faster and faster, almost like it was an automatic rifle,” Owen said. “At that point, everyone on stage started running everywhere.”

Owen dashed by victims covered in blood and eventually found shelter in his bus. The gunfire still hadn’t stopped by the time he got there, he said.

“It wasn’t something that was quick. It was chaos for a pure seven to ten minutes,” he said.

At least one off-duty Las Vegas police officer was among those shot, Lombardo said. Several other off-duty police officers are believed to be among the dead and injured.

Flights in and out of the Las Vegas airport were temporarily halted.

“My warmest condolences and sympathies to the victims and families of the terrible Las Vegas shooting. God bless you!” he wrote.

“The hearts & prayers of the American people are with you. You have our condolences and sympathies,” he wrote.

“To the courageous first responders, thank you for your acts of bravery,” he added.

Mandalay Bay tweeted out a statement that said, “Our thoughts & prayers are with the victims of last night’s tragic events. We’re grateful for the immediate actions of our first responders.”

This is a developing story. Please check back for updates.