Home
News
Politics
Top Stories
U.S. & World
Biden to call on states to make coronavirus vaccine available to all adults by May 1 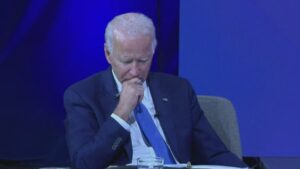 (NBC) WASHINGTON — In a speech Thursday marking one year of coronavirus pandemic shutdowns, President Joe Biden is expected to announce that the United States could be on track to reach a sense of normalcy by Independence Day — and that he is calling for all U.S. adults to be eligible to receive the vaccine no later than May 1.

“Tonight, the president will address the nation to remind us where we’ve been, how far we’ve come, and he will speak to the path ahead for the United States,” said a senior administration official, previewing Biden’s speech. “He will put the nation on a path to get closer to normal by July 4th.”

As part of that effort, Biden plans to announce that he is directing states, tribes and territories to make all adults eligible for the vaccine no latter than May 1. In addition, he will announce new efforts to increase the number of vaccinators, such as expanding the pool of qualified people to administer shots to include dentists, veterinarians and medical students.

Biden will also lay out plans to increase the number of locations where Americans can get vaccinated, doubling the number of pharmacies participating in the federal pharmacy program as well as doubling the federally-run mass vaccination centers, and allocating more vaccines to community centers that help reach low income and rural areas.

“The fight is far from over, we still have a lot work to do,” the president plans to say, according to an administration official. “But together, unified, we can defeat this pandemic and we can all celebrate a more normal Fourth of July with our family and friends, gathering in small groups to celebrate the holiday.”

Still, officials cautioned that a return to crowded indoor events was not likely by July 4th; rather, Americans could expect to host backyard barbecues and small gatherings.

“This depends on the American people doing their part to get to a more independent Independence Day than we had in 2020,” said a senior administration official, urging people to continue to wear masks and to get vaccinated.

The president’s speech, his first prime-time address since taking office, was to come just hours after he signed the $1.9 trillion Covid-19 relief package into law, his first legislative achievement since taking office less than two months ago — a measure to infuse billions into the U.S. economy and bolster funding for vaccines, testing and school reopenings.

The package, which was unanimously opposed by Republicans in Congress, will provide millions of Americans with $1,400 stimulus checks that are set to go out by as soon as this weekend, the White House said Thursday. The White House is planning a victory lap to mark the achievement with the president, first lady Jill Biden, and Vice President Kamala Harris hitting the road next week.

His speech hours later comes as the country reflects on a year of devastation that has included more than 500,000 lives lost and an economic crisis that has left millions unemployed.

But it also comes at a time of hope: The U.S. is administering nearly 2 million shots a day, with enough vaccine supply on the way for every adult in the country to get vaccinated by the end of May.

The president’s remarks will aim to balance these twin realities, according to a senior administration official. His tone will in part be “somber” as he reflects on the lives lost while also showing that “there is light,” the official said.

Previewing his remarks, Biden said Wednesday that he would “talk about what we went through as a nation this past year.”

“But more importantly,” Biden said, “I’m going to talk about what comes next. I’m going to launch the next phase of the Covid response and explain what we will do as a government and what we will ask of the American people.”

While the speech follows the signing of the Covid-19 relief bill, Biden is not expected to dedicate much of his remarks to a celebration of that legislative victory.

The president will instead center his focus Thursday night on the sacrifices Americans have made and the path forward, leaving his promotion of the relief package for next week when he and Vice President Kamala Harris travel to swing states to promote the bill.

In addition to direct payments and child tax credits, the measure provides $14 billion to distribute vaccines and $49 billion for Covid-19 testing, contact tracing and personal protective equipment. It also includes $125 billion for K-12 schools and nearly $40 billion for higher education. It will provide $39 billion in child care grants, $25 billion in rental assistance and $30 billion for public transit, as well.

Biden’s speech comes almost exactly one year after then-President Donald Trump sat at the Resolute Desk in the Oval Office and addressed the nation in a prime-time address, warning of the threat of the virus but also promising that the crisis was “just a temporary moment of time that we will overcome as a nation and as a world.”

Biden said Wednesday that there is “light at the end of this dark tunnel of the past year, but we cannot let our guard down now, or assume that victory is inevitable.”

The speech is expected to begin at 8 p.m. ET, and to last roughly 20 minutes.