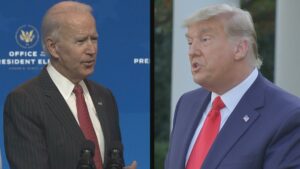 Meanwhile, President Trump has invited Michigan’s Republican legislative leaders to the White House as his campaign tries to overturn election results in that state, where Mr. Biden won by more than 150,000 votes.

President-elect Biden is warning of the dangerous message President Trump and his campaign are sending to the American people.

“I think they’re witnessing incredible irresponsibility, incredibly damaging messages being sent to the rest of the world about how democracy functions,” he said.

In a rambling press conference Thursday, Giuliani refused to give reporters evidence to back up his claims.

Senator Mitt Romney, meanwhile, accused the president of resorting to “overt pressure on state and local officials to subvert the will of the people.”