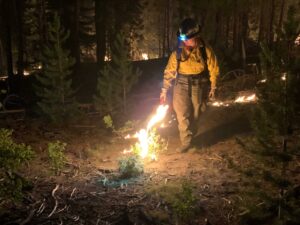 LAKEVIEW, Ore. – Containment of the Bootleg Fire continues to expand.

The wildfire was first reported on July 6 about 15 miles northwest of Beatty. The weekend after it started, the fire grew rapidly, sometimes doubling in size over the span of 24 hours. However, favorable weather conditions eventually arrived and allowed crews to get better control of the fire.

Twenty days after it started, the lightning-caused Bootleg Fire was estimated to be 409,611 acres in size. As of July 26, it was 53% contained.

Over 2,200 personnel are assigned to the fire as crews work to reinforce control lines.

Monday night, burnout operations will be conducted on the most active parts of the fire, which are mostly to the north.

Klamath and Lake Counties have altered the evacuation zones. An interactive map of evacuation levels is available at tinyurl.com/bootlegevac

For the latest updates, visit https://www.facebook.com/BootlegFireInfo