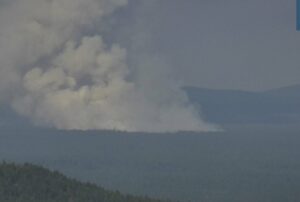 SISKIYOU CO., Calif. — Sunday evening a new quick moving fire was reported burning in northern California. It is burning in the Shasta-Trinity National Forest and is being called the Bradley Fire. In less than three hours, the fire grew from an estimated 35 acres to 300 acres.

The fire started near the Bigelow road area and is moving in a northeast direction. It is burning actively in timber with a moderate to high rate of spread. Multiple resources are on scene or are responding. Aerial fire suppression from air tankers and helicopters is being utilized to support the firefighters on the ground. Additional resources have been ordered.

Around 8:30 P.M., crews said the fire was laying down for the evening which would allow them to make progress constructing lines around the fire.