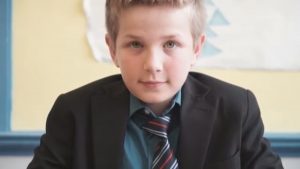 Salem, Ore.–  The State of Oregon will be inaugurating it’s first Kid Governor tomorrow at the senate chamber in Salem. Kid Governor-elect Dom Peters from Willamette Valley Christian School in Brooks received the most votes from a pool of his peers.

First started in Connecticut, Oregon has become the second state to adopt this program that plans to help children wanting to make the world a better place and encourage them to take action through civic participation.

The Kid Governor was selected from 5th grade elementary schools across the state that were invited to nominate a candidate. Over 28 candidates applied by sending in a video outlining their platform, why they were running and an initiative that they would take on.

Students chose from a variety of issues from environmental to social, highlighting its importance and what they planned on accomplishing if they became Kid Governor.

A selection committee chose eight finalists out of the 28 applicants and then let 5th graders across the state vote on who they wanted to represent them in office.

“He’s going put forward his initiative ‘Anti-bullying,'” said Michael Torguson, a selection committee member. “He’s going to show other kids government is responsive, you can make a difference in the political realm.”

Kid Governor Peters will be inaugurated tomorrow at 10 a.m. His term will be for one full year after which new elections will be held for next class of 5th graders.

Peters will be writing blog posts and working to spread his initiative across the state. If you want to learn more on how to follow Peters and his time in office, click here.