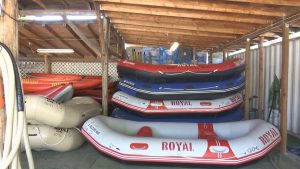 SHADY COVE, Ore. – As temperatures continue to pick up, so is business for rafting companies in Shady Cove.

Raft the Rogue has been in business for 25 years. They say the last week or so, they’ve seen an uptick in business.

Early-season traffic is important to the company, as smoke has affected business in the last few years.

“Last year was the worst we’ve had,” said Raft the Rogue owner David Bowman. “It kinda tied our worst record ever last year because it started in about mid-July instead of August first when it’s been starting. People just don’t wanna go once it’s smoky.”

Raft the Rogue is one of many rafting companies affected by smoke the last few years in southern Oregon.

Bowman said business can decrease as much as 50% when the smoke comes.